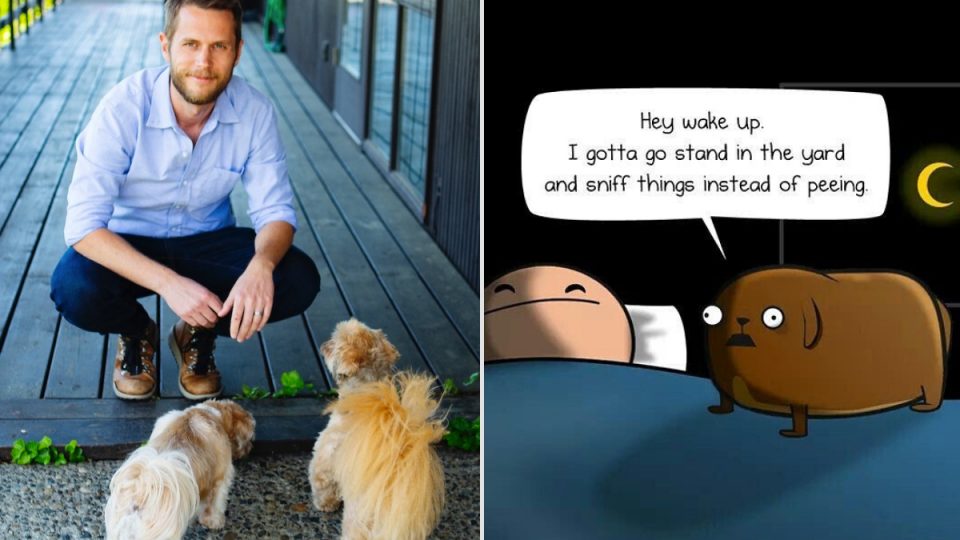 In the midst of a global pandemic and widespread social unrest, you could argue that there are more important things to be talking about than cats and dogs. Yet for Matthew Inman, creator of the meme-unto-itself comic site, The Oatmeal, where imaginary worlds often collide with our pets’ peculiar behaviors, household animals are a gateway for these topics, and then some.

Inman’s natural curiosity about the world and his vivid imagination doesn’t stop with pets, though it often returns to them. The wide-ranging material depicted in his webcomics varies from why Christopher Columbus was despicable, to insects zombie controlling other insects, to his own dogs reimagined as middle-aged men. It all is passionately funneled into The Oatmeal, which he started in 2009. 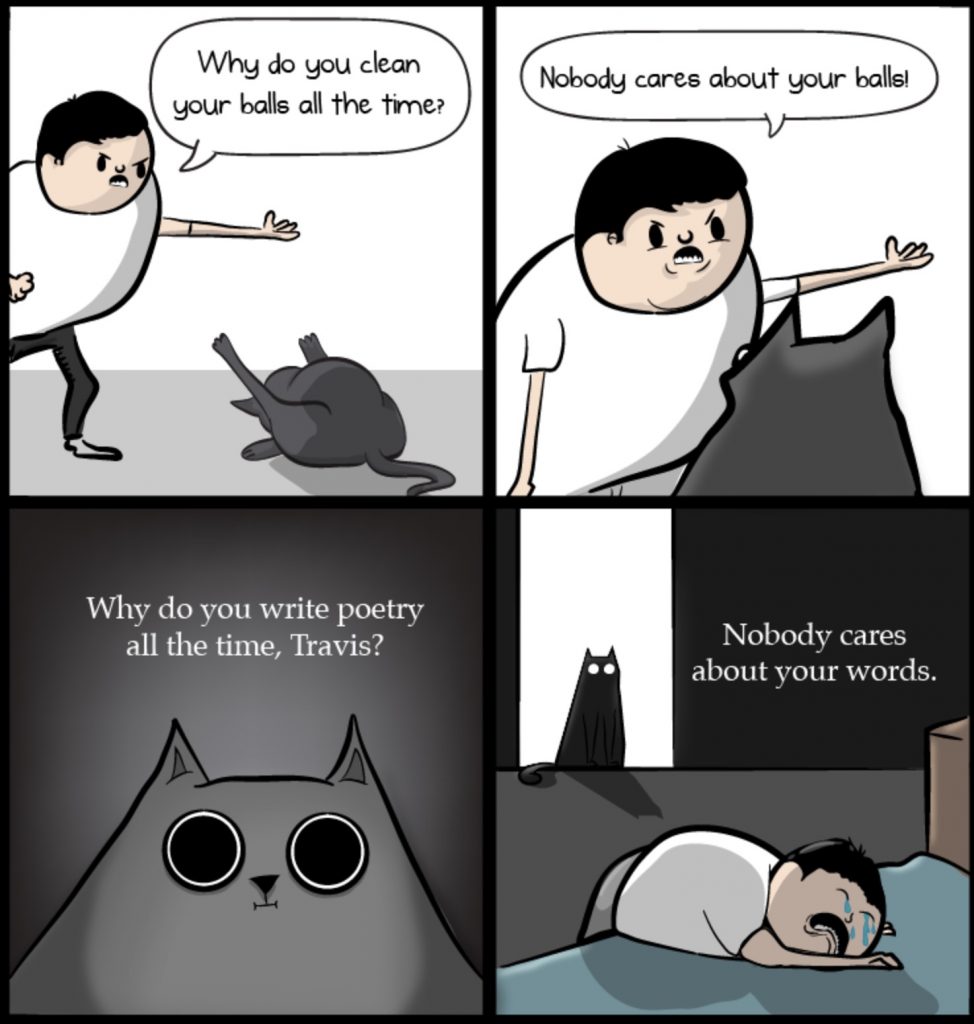 The comic, “Nobody Cares,” from The Oatmeal.

Rover caught up with Inman during a recent interview at his home in north Seattle.

“Once you put a cat in a comic, you’re screwed, that’s your life now,” Inman says, remembering an interview he once read with artist Berkeley Breathed, creator of the comic strips Bloom County, Outland, and Opus, who apparently changed the course of his career when he introduced the character Bob the Cat into his strips. “Every single interaction with his fans after that was like, ‘More cat! More cat! More cat!’”

All things considered, cats, as well as dogs, have been pretty good for business. 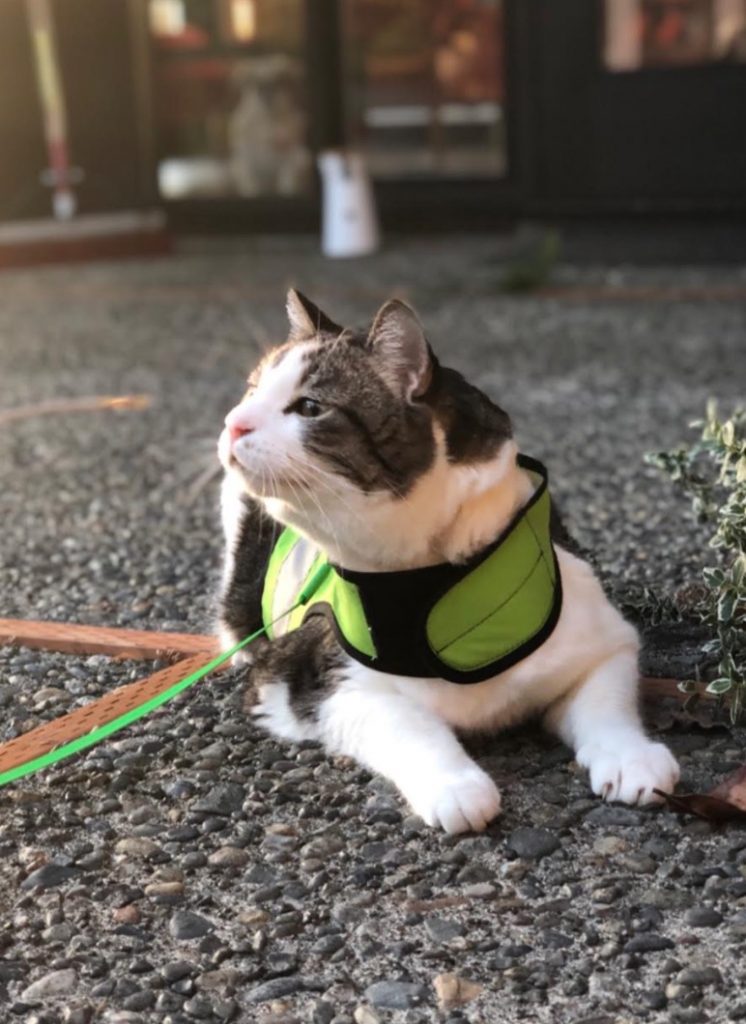 Dogs and cats are often the driving characters in his prolific book series based on his comics, which include titles such as How to Tell if Your Cat Is Plotting to Kill You, My Cat Is More Impressive Than Your Baby, If My Dogs Were a Pair of Middle-Aged Men, and My Dog: The Paradox.

And last but certainly not least, there are the family muses he regularly taps for inspiration: cats Betty, aged 10, and Bullitt, aged 12, and pups Beatrix and Rambo, 10 and 12, respectively. 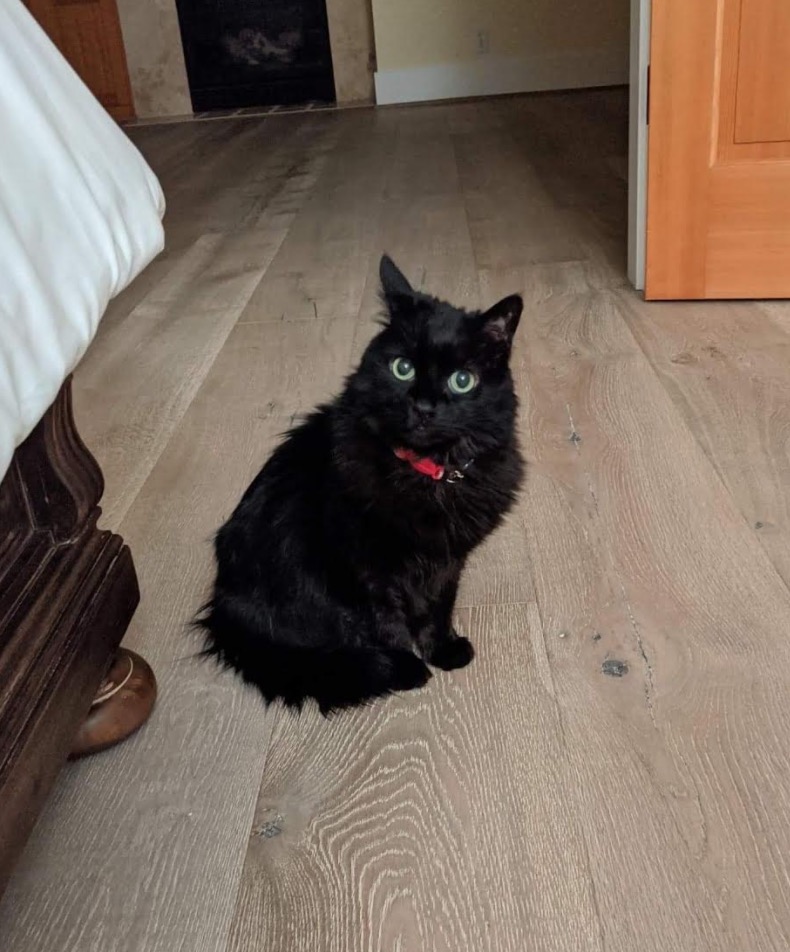 Inman’s cat Betty, who was rescued from a dumpster. Image courtesy Theresea Rusinko.

Inman has been influenced and, at times, traumatized, by encounters with family pets since he was a kid growing up in northern Idaho.

The miraculous sole survival of Domino the cat (one of 17 cats Inman says lived with his family growing up) from a house fire is recounted in the true-life comic, “When Your House Is Burning Down, You Should Brush Your Teeth.” There was a nearly illicit run-in with a stud horse named Toby. And Inman says he’ll never forget seeing his parents extract a mouthful of porcupine quills from the family dog, Teddy.

“You could forget everything else, but the brain hits the ‘record’ button once something horrible happens.” 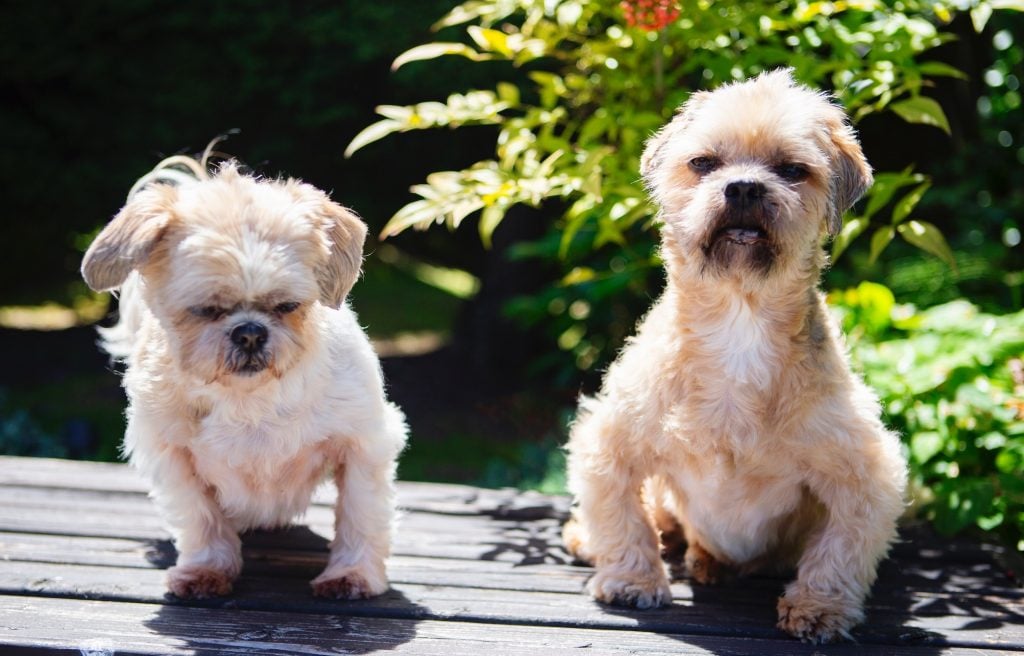 Beatrix, left, and Rambo, right, Inman’s two pet Shih Tzus. Inman suspects Rambo was born in a puppy mill because of his oddly articulated legs. “I got him home and was like, ‘Oh no, he’s inbred.’”  Photo by Nia Martin.

Is there a connection between pets and his creativity? “Kind of,” he says. “One of the tricks I’ve learned about how to be better at what you do is to vary what you do. If I only wrote about the mantis shrimp all day every day, it would be pretty boring, so I’m going to write about space, I’m going to write about dogs, about cats, about grammar, the backfire effect, neurology,” Inman says. 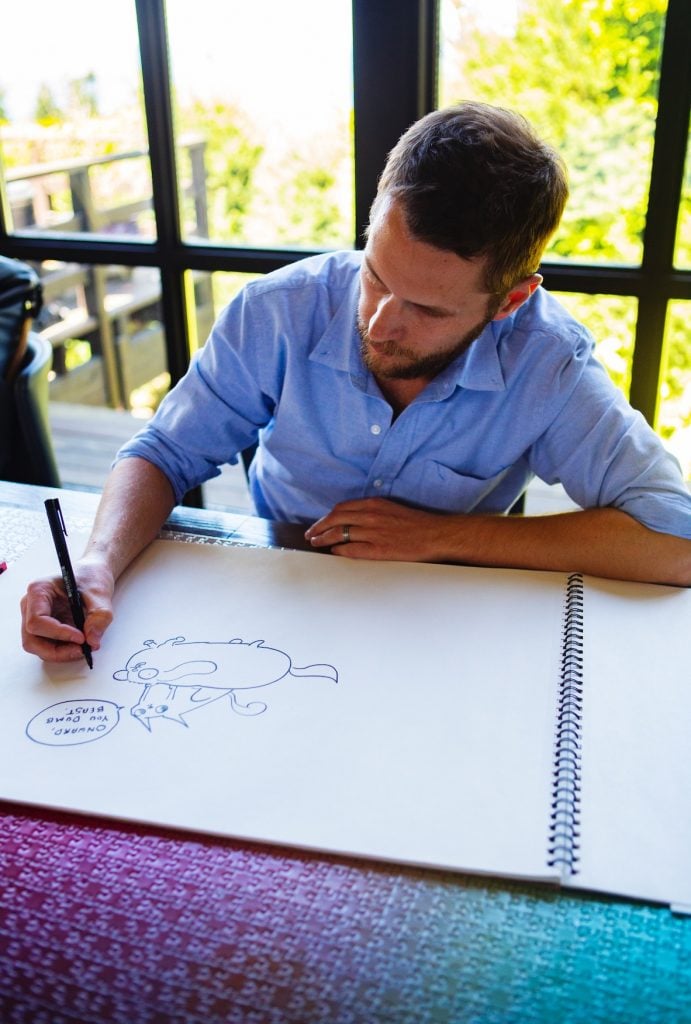 Inman drawing at the dining room table in his north Seattle home. Photo by Nia Martin.

Being genuinely interested in the subject helps, too. “I am a better writer and an artist when I’m interested in something. It makes the comics better, rather than if I had to write a comic about the pros and cons of using Quickbooks.”

This makes Inman’s treatment of certain, sometimes controversial topics—from religion to politics to a dislike of babies—straight from the heart, no creative persona attached. “Some of the older stuff, when I was in my 20s, I was stupid and didn’t know what I was writing about. But mostly, The Oatmeal represents me, 100%.”

Over the years, he’s learned a lot about when—and how—to jump into the conversation. 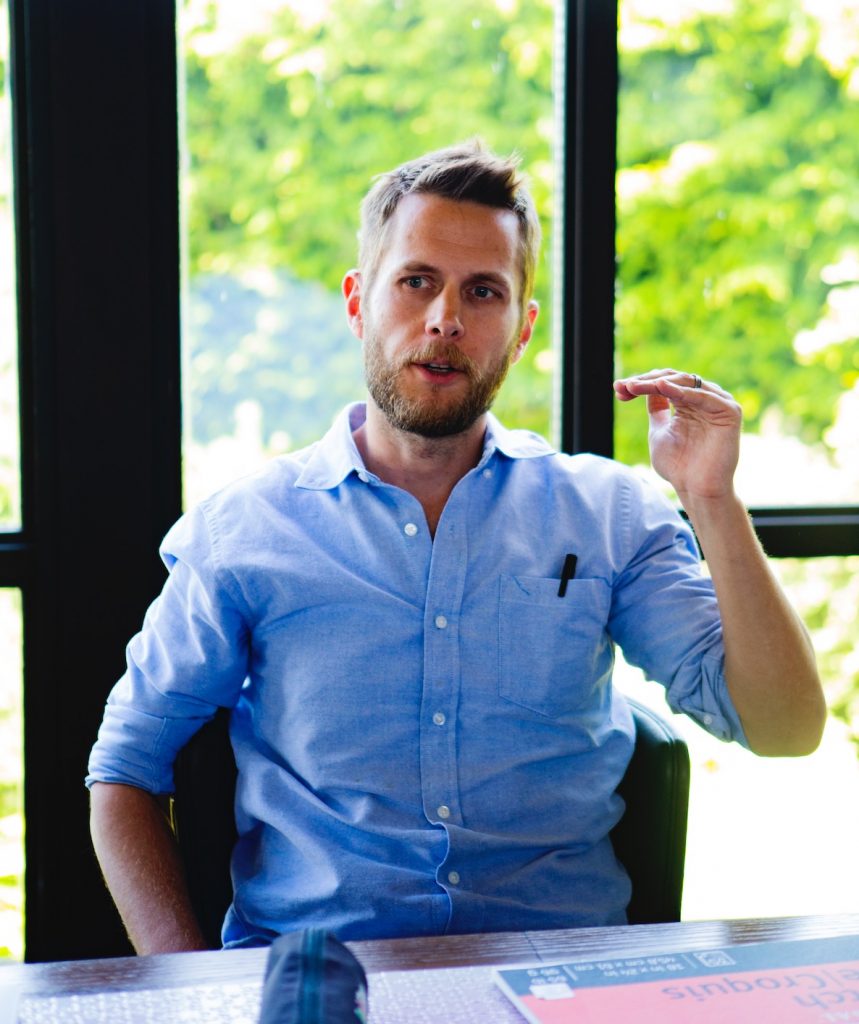 Inman chats about his work, his pets, and his upcoming projects from his home in north Seattle. Photo by Nia Martin.

“Sometimes when the whole internet is yelling about something, I feel like I don’t need to yell. What I try to do is pick things that no one is yelling about—[issues] I feel I could help and change and fix.”

“That was before anyone was talking about this sex-slaver-imperialistic-sociopathic-rapist-monster. A moment where I felt like I could help,” Inman says. “Now I’m seeing all these statues come down, and I’m like, ‘burn ’em down!’

“The other cool thing that happened was that the city of Seattle changed Columbus Day to Indigenous Peoples’ Day the following year. I don’t think I was the driver, but I feel like I was one of the many things that helped that change happen. I was proud because we were one of the first major cities to do that.”

For subjects that he feels someone else could articulate better, “I’ll stick to cats,” Inman says.

A panel from the comic strip and book, “Why My Cat Is More Impressive Than Your Baby”

Cats are so eternally funny and relatable that Inman has taken a step back from the grind of feeding The Oatmeal to focus on an animated TV show he’s working on about…cats.

“I was making a cat movie with Illumination but it wasn’t working out, so I had to walk away. But part of the reason why I was able to get a movie deal in the first place was because, when you look at cat comedy, it’s huge. But it’s a code Hollywood hasn’t cracked yet. Cat comedy is amazing and it’s easy, a giant collection of jokes. But the best they could do was Garfield or Cats! The Movie.”

Inman says he’ll be able to share more details about the series in a few months. When he does, it’s hard to imagine the millions of monthly Oatmeal visitors won’t be beside themselves with delight. 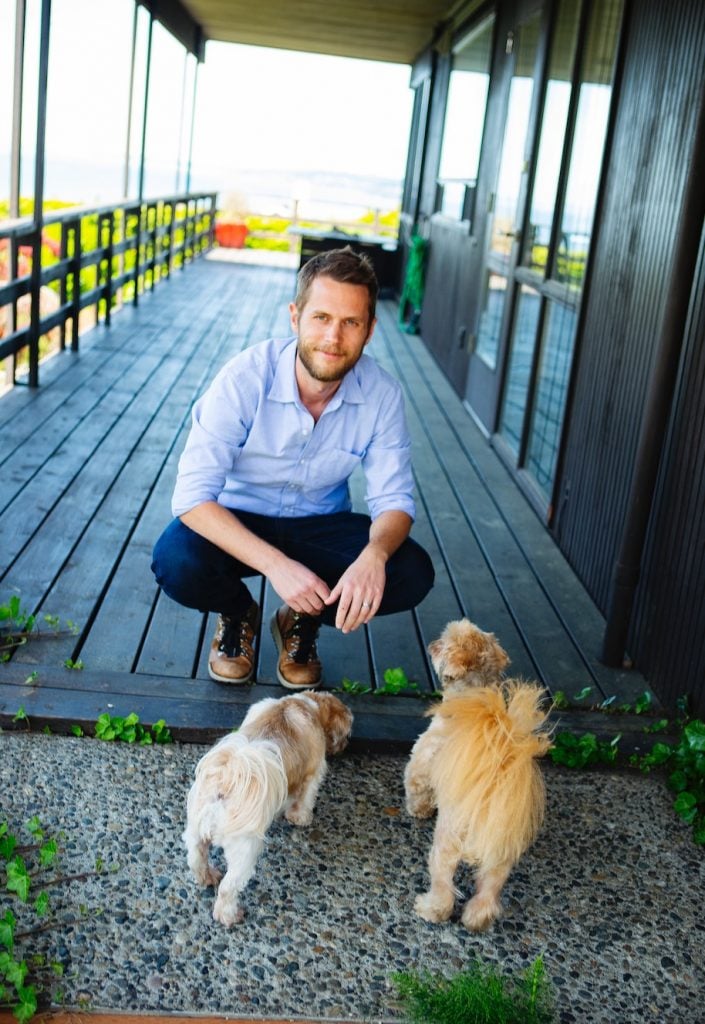 Inman with Beatrix and Rambo. Photo by Nia Martin.

After all, cat comedy endures, much like our abiding relationship with our pets. And Inman’s unique comedic formula reveals, often with a twinge of tenderness, just how compelling he finds the human-to-pet bond to be.

“Maybe that’s why we love them, because their lives aren’t lengthy, or logical, or deliberate, but an explosive paradox of fur, teeth, and enthusiasm,” wrote Inman about Rambo to whom he dedicated the strip, “My Dog: The Paradox” (which then became a book). “And you’ll never meet a person who is so genuinely happy to be with you.”

In a world full of uncertainty, chaos, and discord, it’s a comfort to know you can always rely on the unconditional love of a pet—or four.

The laughs are nice, too. 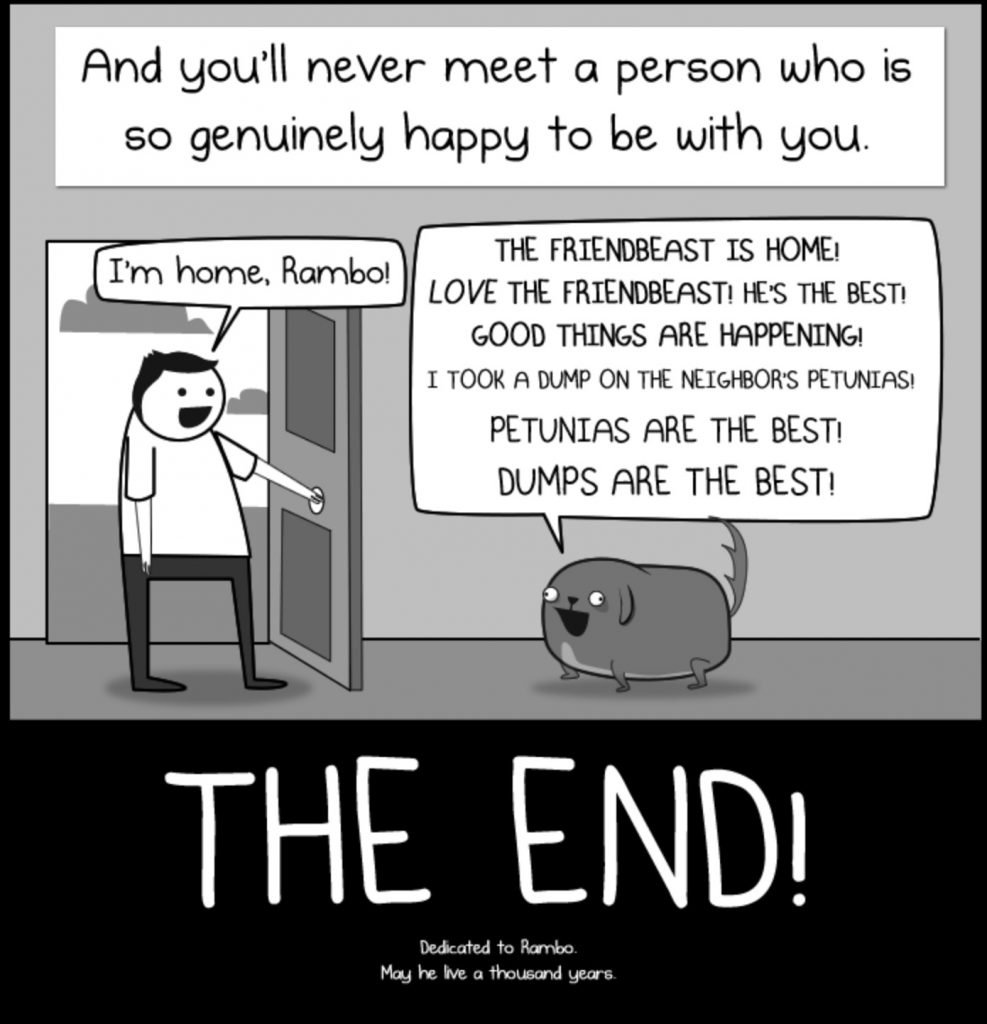 A panel from the comic strip and book, “My Dog: The Paradox”

Pet Causes: As a pet lover, wildlife enthusiast, and naturalist, some of Inman’s favorite charities are the Progressive Animal Welfare Society, which helps to rescue and rehabilitate injured pets and wildlife, killer whale advocacy group the Orca Network, and conservation organization the National Wildlife Federation.

Rover Takeover: When Inman and his wife needed a cat sitter, they found one through Rover. She sat for the couple’s pets for years, and eventually left Rover to become Inman’s full-time assistant.

Gwendolyn Elliott is the Pet Shopping Editor at Rover. Before coming to Rover, she was an editor at Seattle magazine and Seattle Weekly. She loves learning and writing about the arts, culture, travel, animals, and plant-based living, and is a self-professed “freak for animals” who believes pets are people, too.