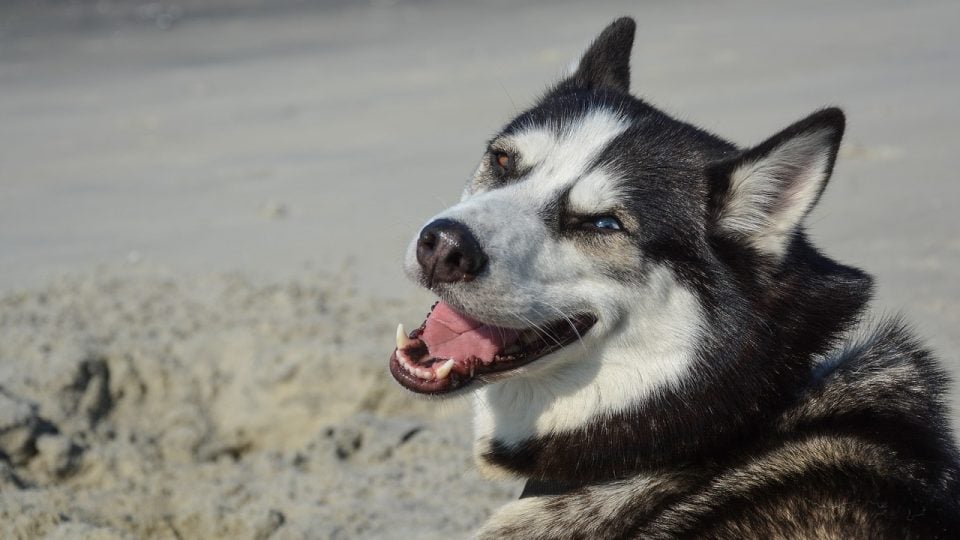 The Siberian Husky is easily one of the most stunning dog breeds in the world. But he’s not the only wolf-like, arctic dog who’s won our hearts. Here we present seven dog breeds that look like Huskies—and how you can tell them apart. 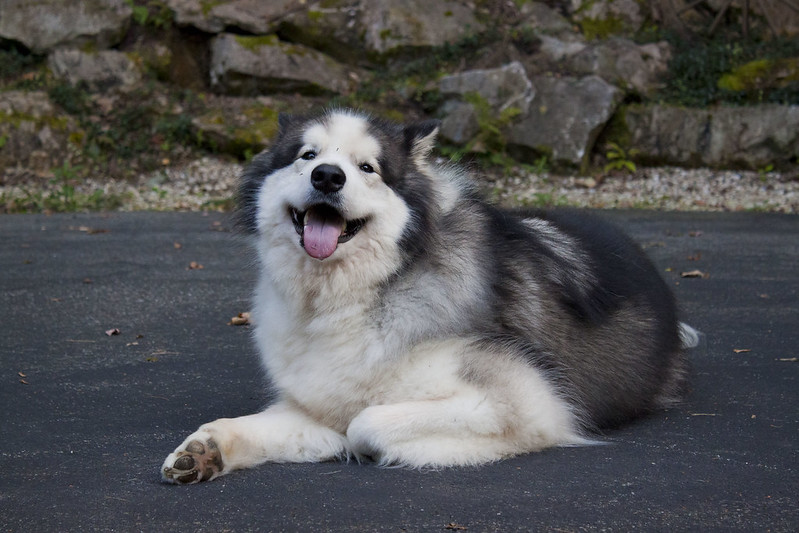 This pair of sled-pulling dogs are frequently confused—and it’s no wonder! Huskies and Malamutes are both hard-working Spitz breeds that originated in arctic climates, and they bear a striking resemblance to each other.

What sets the two apart? Well, size, for one thing. The Malamute is considerably heavier than the Siberian Husky—as in twice as heavy!

If you examine the two breeds more closely you’ll also notice that, although similar, their markings are not identical. Huskies tend to have bolder coloring, whereas a Malamute’s markings will be, well, more muted (pun fully intended).

A Husky appears to be wearing a white mask, with streaks of color cascading down his nose and hovering above his eyes. A Malamute, on the other hand, will have a mostly white face topped with a cap of color on his head. 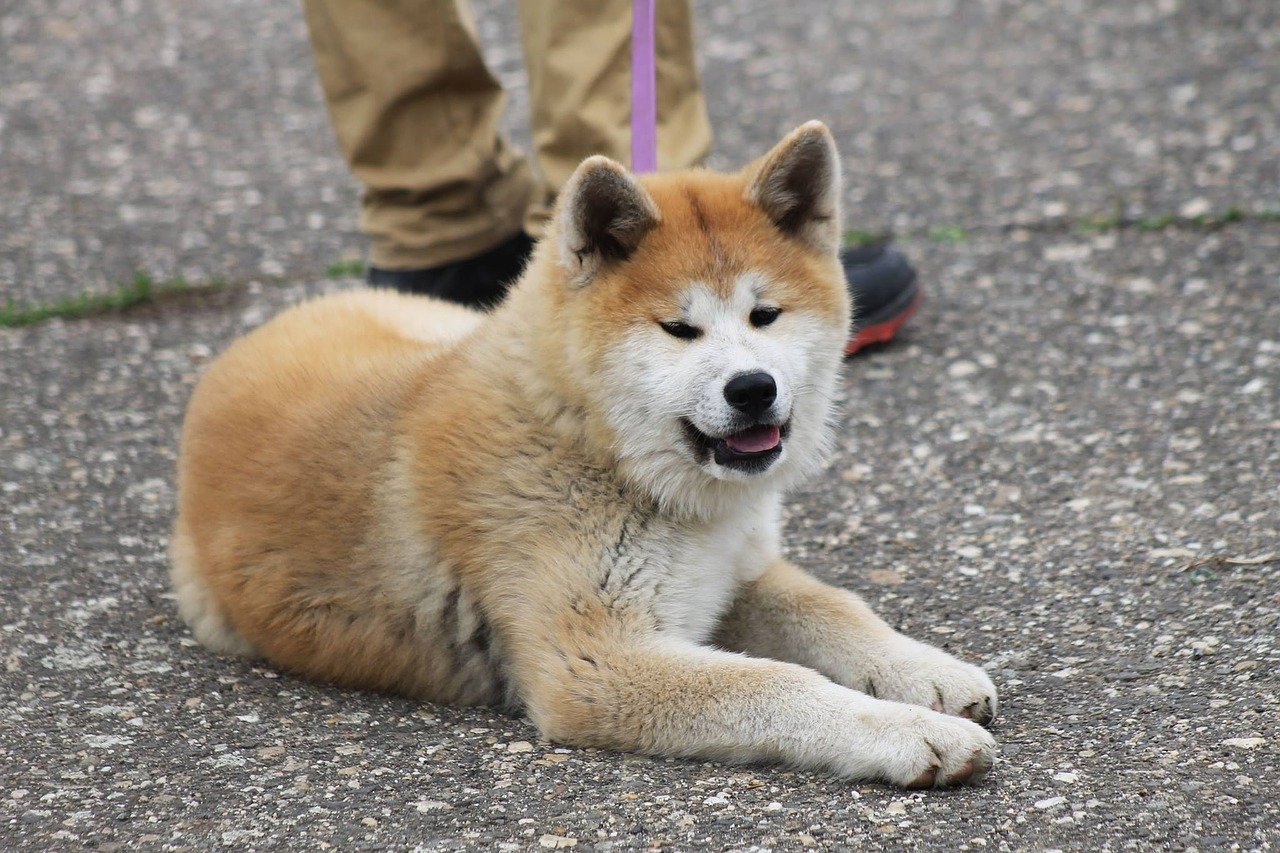 What sets the rugged Japanese Akita apart from his Husky counterpart is the former’s giant size. In fact, these burly canines can be more than double the weight of a Siberian Husky.

Akita’s also sport a permanently curled tail, while a Husky’s bushy tail only curls up when he’s excited or alert.

But the differences between the breeds don’t stop with their looks. Because of their caution around strangers, Akitas are much more suited to the watchdog life. A Husky, on the other hand, is a social butterfly who sees everyone as a potential BFF. 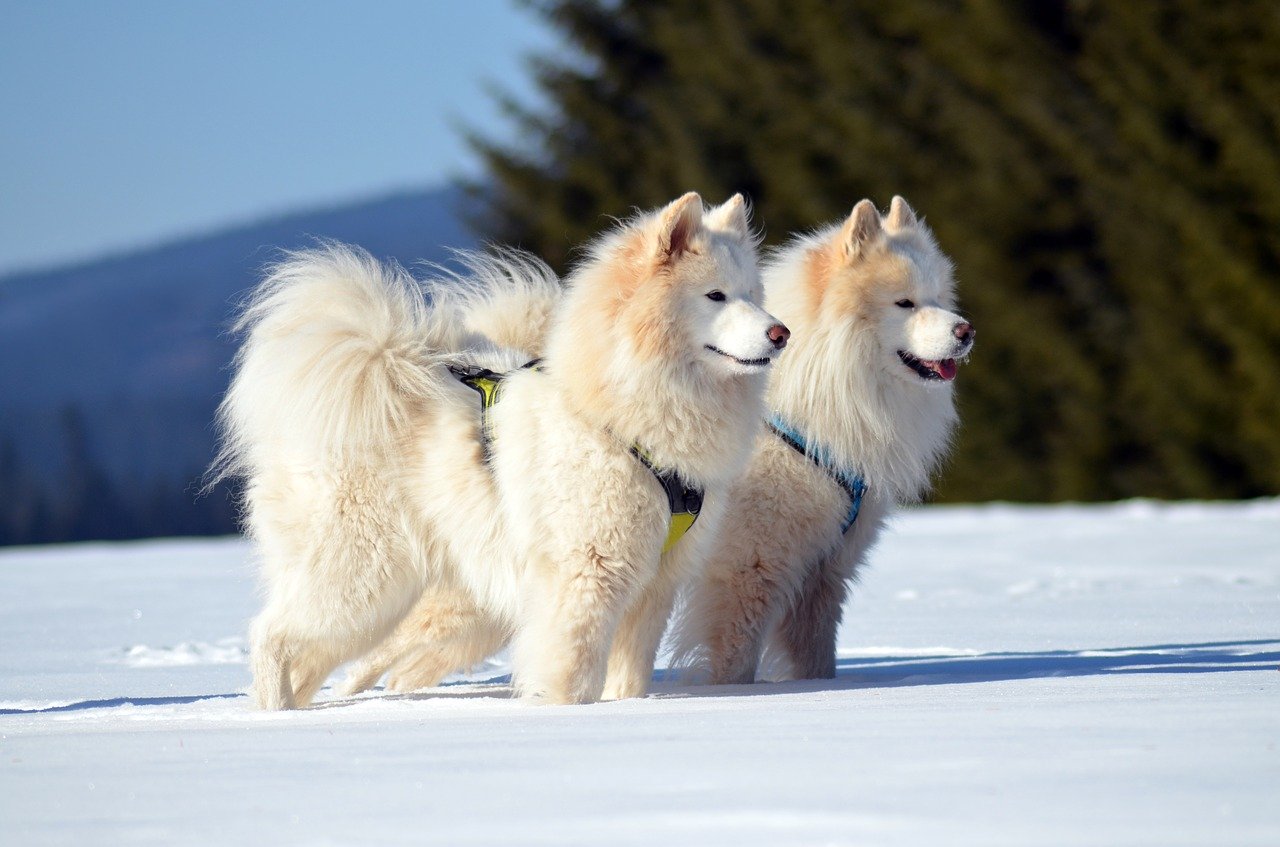 The perpetually smiling Samoyed shares several similarities with the Siberian Husky, including their powerful build and thick coats. Both breeds can trace their origins back to Siberia where they were employed as hard-working sled dogs.

Where the two diverge is their coat color. A Samoyed will have a white or creamy coat, without the signature black or brown facial markings that are the hallmark of a Siberian Husky.

Looks aside, both dogs are known to be friendly and loyal companions. 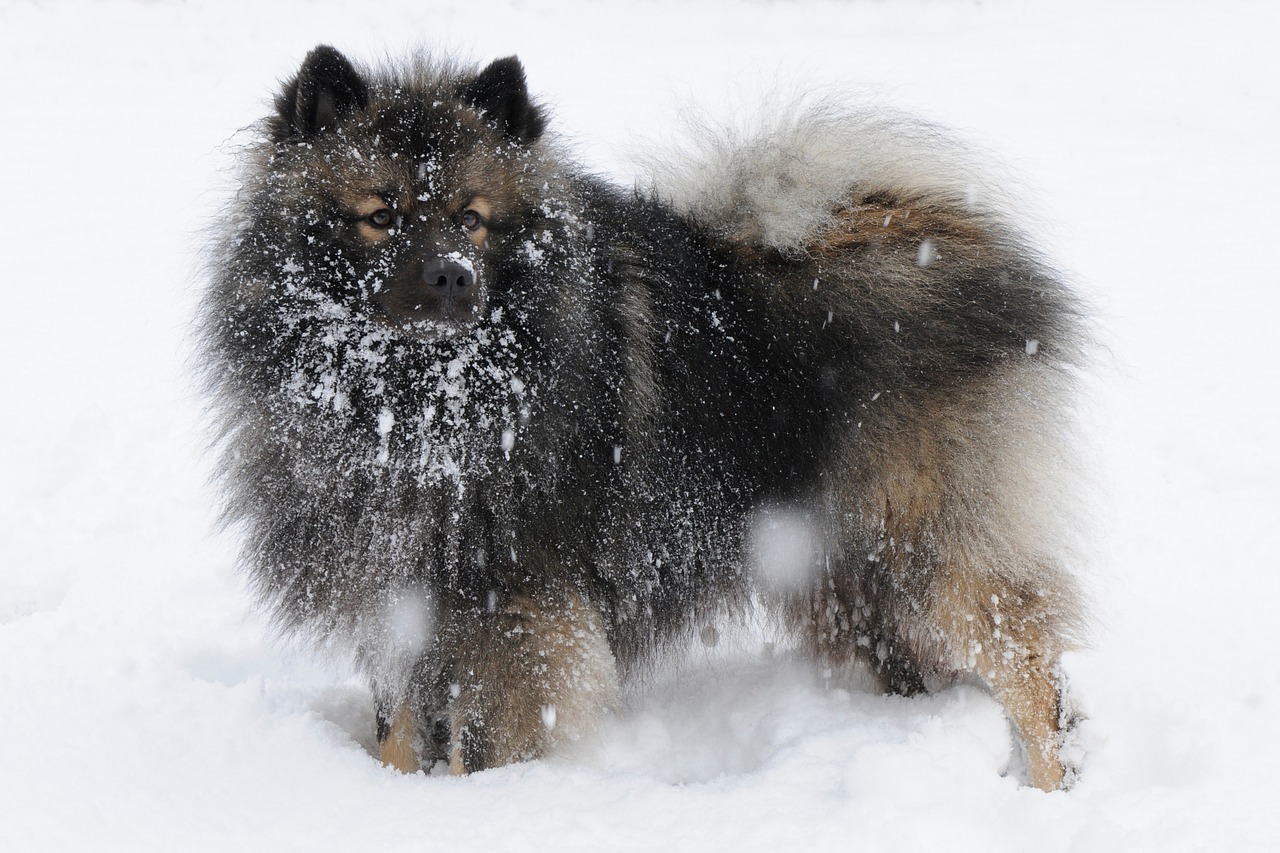 If there’s one thing these medium-sized dogs have in common with Huskies, it’s this: they’re not the best choice for first-time dog owners. Keeshonds and Huskies can display a stubborn streak that’s tough to work with.

What makes them different? The Keeshond has a significantly denser coat that requires more maintenance than a Husky’s coat. Like an Akita, a Keeshond will fare better as a watchdog than a Siberian Husky, and they’ll be less inclined to wander than their drifting cousin.

All differences aside, both breeds are incredibly loyal and affectionate family pets.

Bred to resemble a wild wolf, the Utonagan is a mix of three domestic breeds: the Alaskan Malamute, the German Shepherd, and the Siberian Husky.

Keeping true to their wolf-like appearance, the Utonagan is a larger breed than the Husky, although both breeds share a love of wide-open spaces to roam and play.

Both breeds are well-suited to families with an active, outdoorsy lifestyle.

Not to be confused with the darling Pomsky, the Klee Kai is a purebred working dog that resembles a miniature Husky. Aside from the obvious cute-factor, these dogs love to run and play—just like Siberian Huskies. The American Kennel Club points out that Klee Kai tend to be on the shy side, but that doesn’t mean they’re afraid to be vocal. These tiny dogs will loudly announce their happiness to anyone within earshot. 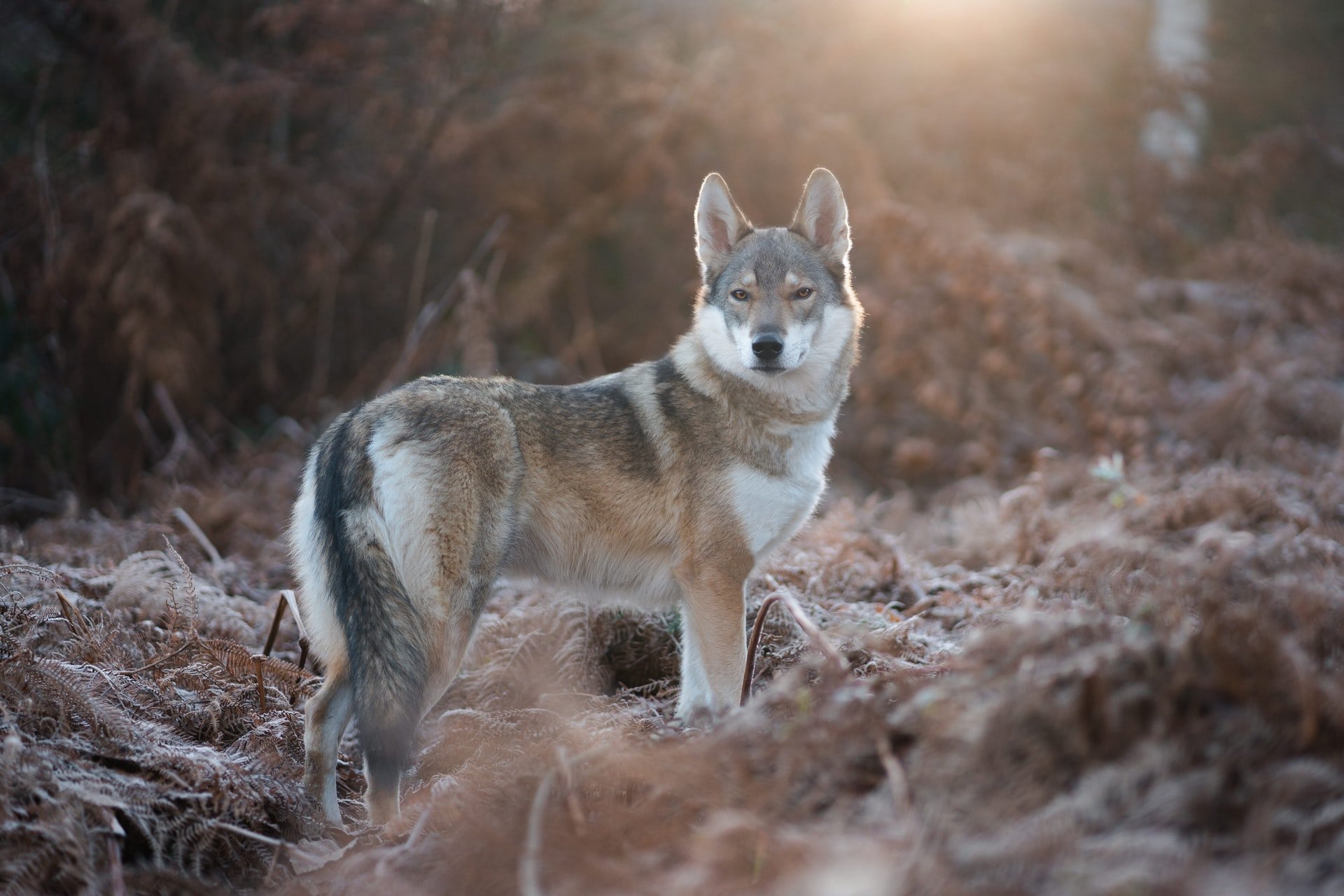 This wolf-ish canine is definitely among the ranks of dog breeds that look like Huskies. While their exact origins remain a mystery, the Tamaskan is a mix of several arctic breeds, including the Alaskan and Siberian Husky, Malamute, German Shepherd, and the Canadian Eskimo dog.

While the Tamaskan is larger than the Husky, both breeds have a thick coat, bushy tails, and erect ears. They’re as graceful as they are alert, and they make exceptional athletes.

Husky or not, there’s something undeniably captivating about these wolfish, wild-looking dogs. Their regal coats and intelligent eyes certainly have no trouble holding our attention.

Liz is a freelance writer specializing in the pet industry. She’s also an enthusiastic Rover sitter, so when she’s not writing, you can find her smooshing her face into fur. She lives with her daughter and massive kitty, Floyd, in a very cold city. Check her out at LizWritesForYou.com.