You’ve probably heard that cats have nine lives, but the truth is they’re just as mortal as the rest of us. Beyond old superstitions, what do we know about the cat lifespans? How long do cats live, and what can we do to make sure we can help our beloved fur friends enjoy long and happy lives?

It turns out that cat lives vary pretty dramatically based on their environment and us pet owners have a lot of impact on whether our kitties live to be granny-aged. For example, we’ve got a fun tidbit here about a cat that lived to be a whopping 38 years old, thanks to a pet owner who has a knack for aging kitty timelines.

But that’s an extreme example. Here are the bare basics pet owners need to understand about the length of cat lives.

How Long Do Cats Live As Pets?

You love your cat, so of course, you want them to stick around as long as possible. But how long cats live as pets depends a lot on what their day to day looks like. Here’s what you should know about cat lifespans.

What is the average life expectancy of an indoor cat?

The average indoor cat lives to an average of 14 years old, according to PetMD, though WebMD suggests they can often live up to 17 years old. This is on par with other cats, like lions, who live about 15 years in the wild. Though big cats live much longer in captivity, up to 30 years.

What is the average life expectancy for an outdoor cat?

The average outdoor cat lives between two and seven years old, according to WebMD. The reason outdoor cats face shorter lifespans is that they face greater challenges. As Rover previously reported, outdoor cats can be attacked, leaving them with scrapes and scars, and they’re more likely to contract viruses like the feline immunodeficiency virus and feline leukemia virus.

What is a good age for a cat?

We’re pretty sure every day you get with your cat is pretty awesome, but beyond the average age for a cat, there are some real outliers. The oldest a cat has ever lived was 38 years and 3 days, according to the Guinness Book of World records, well above the average lifespan. That lucky cat was Creme Puff, a mixed tabby cat who lived in Austin, Texas with her own Jake Perry.

Mr. Perry was quite eclectic and another one of his cats, a Devon Rex-Sphynx mix named Grandpa Rex, held the previous world record. Perry suggested a mix of commercial cat food, along with a breakfast of eggs, turkey bacon, broccoli, and coffee with cream was the secret to his cats’ long lives, per an interview with Atlas Obscura. Oh, and an eyedropper full of red wine every two days. (Not a diet recommended by veterinarians, to say the least.) He also turned his garage into a movie studio streaming nature documentaries for his cats to keep them stimulated.

There hasn’t been a ton of research on this, but a 2014 study in the UK looked at more than 4,000 deceased cats and found that female cats tended to live about two years longer (as reported by The Dodo.) 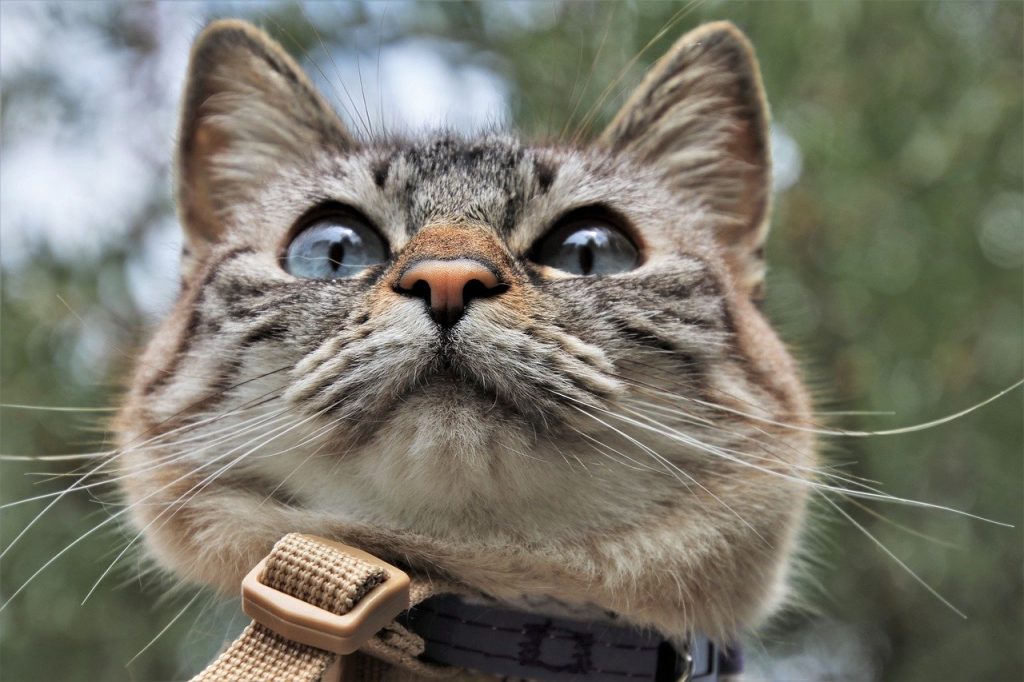 Image by pasja1000 from Pixabay

How to Keep Your Cat Healthy

While some factors of a cat’s health are out of your control, like genetics and accidents, there are plenty of things you can do to keep your cat as healthy and long-lived as possible.

As we already discussed, a cat’s average lifespan increases dramatically when they’re kept indoors, away from diseases and physical trauma. If you want your cat to get some outdoor time, consider an outdoor enclosure such as a catio, or training your cat to enjoy leash walks.

2. Keep your cat at a healthy weight

Obesity in cats is associated with several diseases, such as cancer, diabetes, heart disease, and osteoarthritis. It also more than doubles their mortality rate compared to lean cats, according to VCA Hospitals. Keep treats to no more than 5-10% of your cat’s daily diet, advises the ASPCA.

3. Get your cat plenty of exercise

Exercise helps keep your cat’s weight down, helps her burn off excess energy, and gives your brain something to do. PetMD recommends bursts of playtime that last 10-15 minutes, using toys like feathers, strings, and lasers, as well as providing climbing opportunities on cat towers.

4. Spay or neuter your cat

Spaying prevents several cancers, including uterine and breast, especially if you spay your cat before her first heat (read more about heat in cats here). Male cats benefit from neutering by preventing testicular cancer. Altered cats are also usually better behaved. Female cats won’t go into heat and seek out a mate, and male cats tend to mark less.